From Heads to Toes of the Gods

From Heads to Toes of the Gods 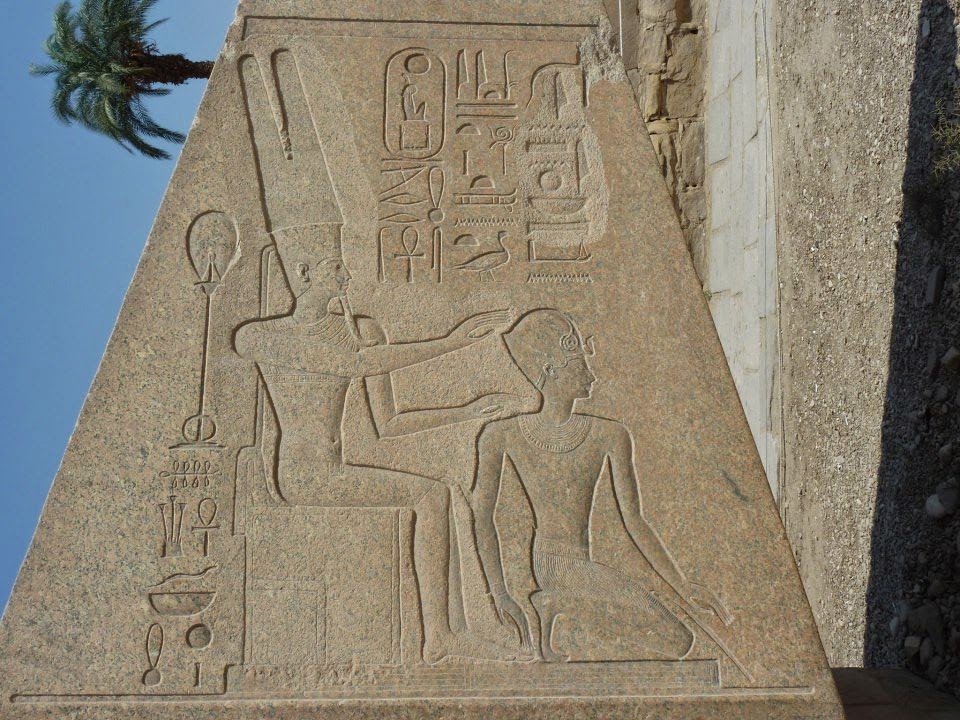 How many times did you “electrocute” yourself by discharging the annoying electrostatic power harvested by wearing wool clothing? Sometimes I hated to get out of my car for the same reason: the big painful spark that shook my body when I was touching the ground! Even the more prosaic kiss can deliver a shock that is rather electrical then a romantic subjective feeling.
In our days electric stimulation of the brain activity is a fact. Trans-cranial electrodes can deliver small amounts of electric power in order to stimulate certain parts of the brain to enhance memory for example.
But from all the present evidence we have we can conclude that ancient Egyptians were in control of electrostatic power and they were able to use it as conscience boosters, brain activity enhancers and in terrestrial god-to-human communication.
Here are some interesting features that support this hypothesis:
The depictions of the Egyptian kings show them sometimes wearing sandals and sometimes not. Also part of the divine garment is the gold bull tail interpreted by some as a sign of virility. The fabric in use for all priests and kings garments is linen. Linen is not creating electrostatic charge. Linen was also mandatory for all Moses Tabernacle priests. Sandals are depicted as worn in normal life. During prayers or direct contact with the Gods both the king and the Gods are barefooted in direct contact with the earth. Also when on Earth they wear gold tails connected to a gold waist belt.
Looking for some articles about static electricity I stumbled upon an article that is explaining very well and simple how this phenomenon works.  (http://www.livescience.com/4077-shocking-truth-static-electricity.html)
I have to quote some of the explanations if you are already familiar with static electricity that develops in enclosed, dry places (as Egyptian temples by the way).
“Some manufacturing workers are required to abide by strict clothing regulations, avoiding sweaters and hats that might encourage static. Technicians might wear wrist straps that are attached to the floor with a metal wire, sending extra electrons out of the room and into the ground.” Doesn’t this sound familiar? Remember the strict guidelines on how Moses’ tabernacle priests had to be dressed with and what fabric should they use? Is it just coincidental the grounding with wrist straps of modern technicians and the golden King’s tail connected to a waist belt instead (a couple of gold tails were found in Tutankhamun’s tomb)? 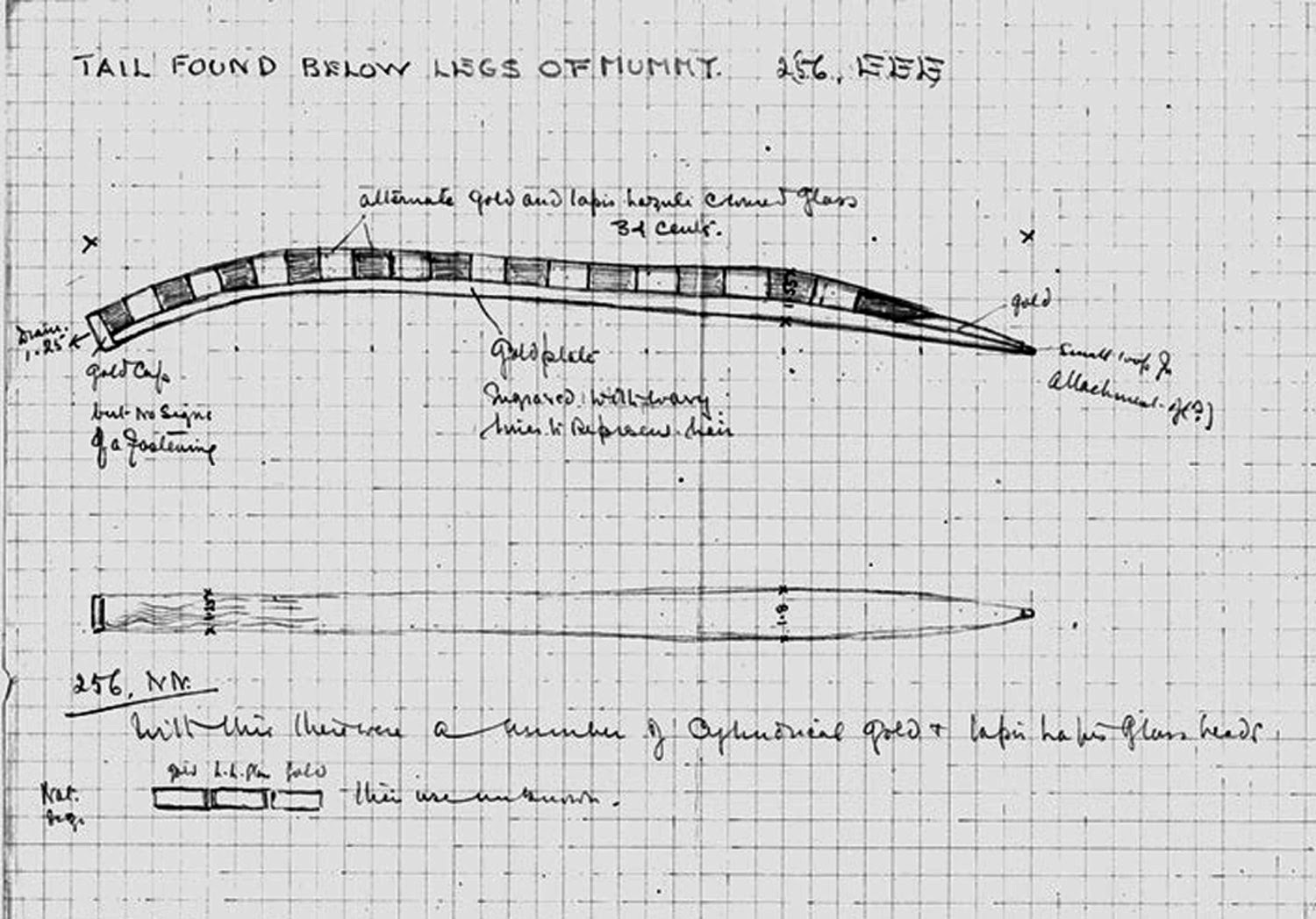 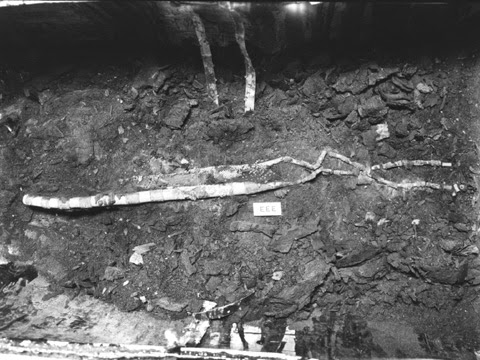 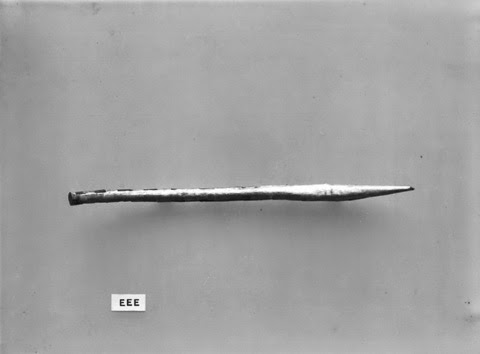 Other redundant discharge assets can be found in ancient kings objects and cult assets as the Was scepter.

Ancient Egyptian knew about the existence of static charge and maybe they interpreted it as the power of life. It is impossible that in a very dry environment and climate as ’s one, people will not observe sparks created by static electricity. Also ( I know is a gruesome and graphic explanation but I have to be clear) a living body, a priest in this case, when charged and insulated from the ground, was able to discharge himself during a mummification process by touching the body of the deceased. Maybe the corpse was insulated from ground and the priest was barefooted. The result was a blue spark and a corpse convulsing for a fraction of a second. Try to put yourself in the priest’s shoes, or sandals! What would your conclusion be? Experiments with human bodies and frog body parts involving electricity proved that the flux of electrons is moving through the nervous system creating a muscular response. The logic conclusion should be that electricity is life or the soul that is still present in a dead body!
Is it static electricity enough powerful to create such events? From the same site I gave you the link above, I quote:
"As you keep walking across the floor, you become full of electrons," said Todd Hubing, from the Electromagnetic Compatibility Laboratory at the University of Missouri-Rolla. "Eventually more electrons don't want to come up on you because you're so charged up. You end up with a high voltage, about 20,000 to 25,000 volts."
So we are able to do incredible things with all this power!
Let’s leave the “afterlife” and go back to the land of the living!
First I have to remember you that is subjected to intense seismic activity. Fault lines are particularly electrostatic generators. Now we can move on. 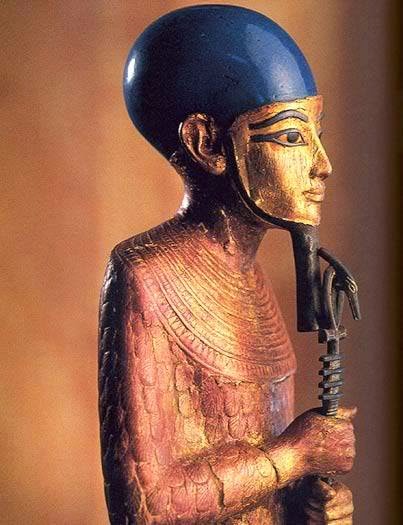 Static electricity does not discharge from a living body in a uniform pattern. In a dry environment the head will keep a higher negative charge than the feet. In order to reach a neutral charge from head to toes it is compulsory to control somehow the electrostatic charge of the body. All of those gold devices as crowns, gold bands, bracelets, finger rings and toe rings warn by the ancient Egyptian kings were assets that could also store electricity. The throne was gilded as well as the platform on which the throne was placed. 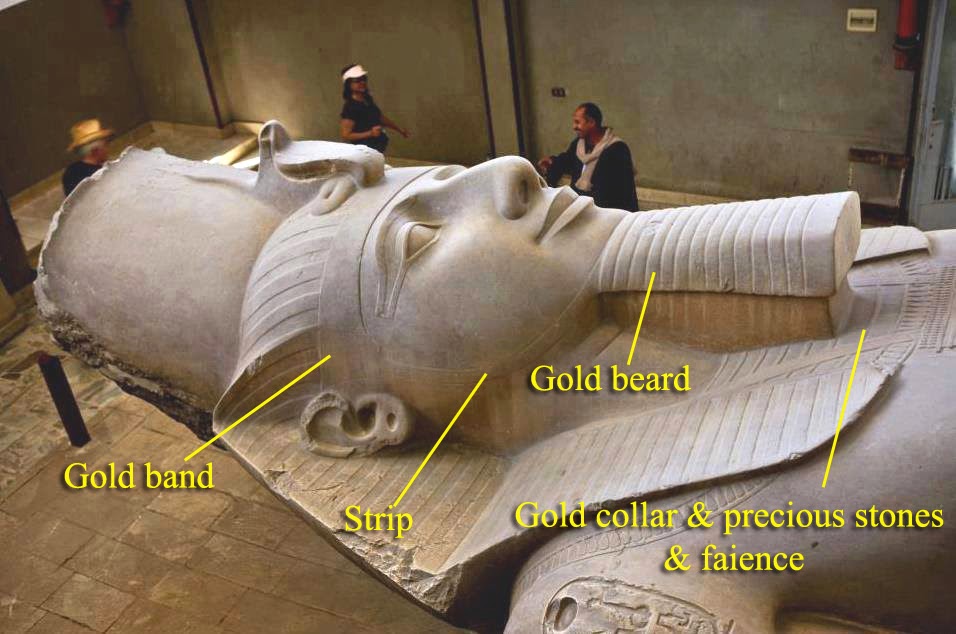 So the boosted king had an increased brain wave activity just because the electromagnetic field surrounding his head was higher then normal. It is well known that electromagnetic fields can activate certain parts of the brain and can even create strange visions or sounds in the mind of the test subject. But what if this hyper brain wave activity is not just a mere illusion but there are actually doors opened to other realities or places in the Universe or telepathic communication, and so on? What if ancient Egyptians elite knew and controlled it? (more on how ancient regalia was used and an excellent link on how the brain works in a previous article: King Tut communication device)
Let’s explore further the technical issue!
I think we should take the ancient artifacts that represent the king’s garment as a whole. By itself every item is just a beautiful object with no practical meaning. But what if we are dealing with a special sacred suit?
The leadership beard, symbol of the Egyptian king only, was connected by two strips (possible with gold line inserted into the fabric) with the golden band covering the forehead above the prefrontal cortex (the communication area of the brain). Other gold “amulets” are placed on the shaved skull and are connecting the royal crown to rest of the device. 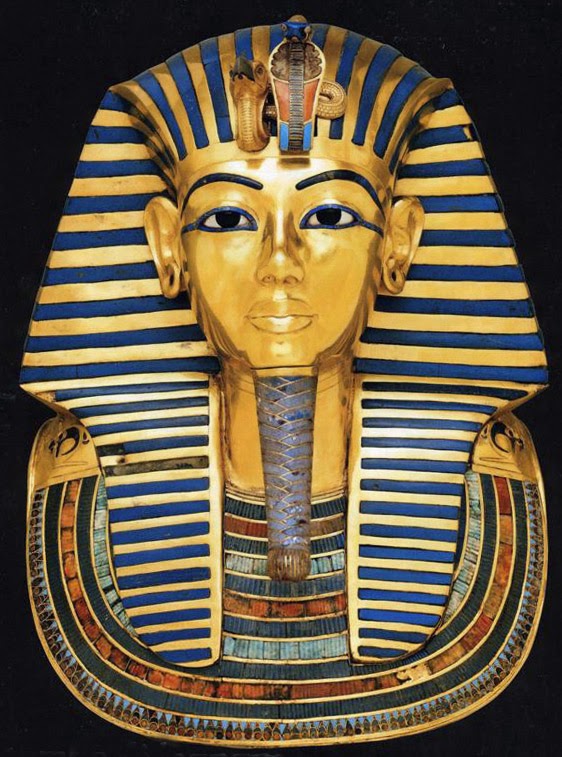 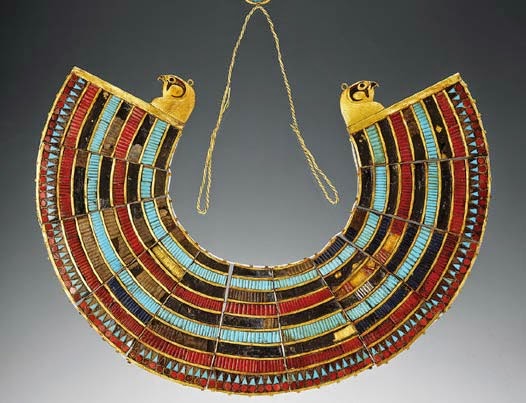 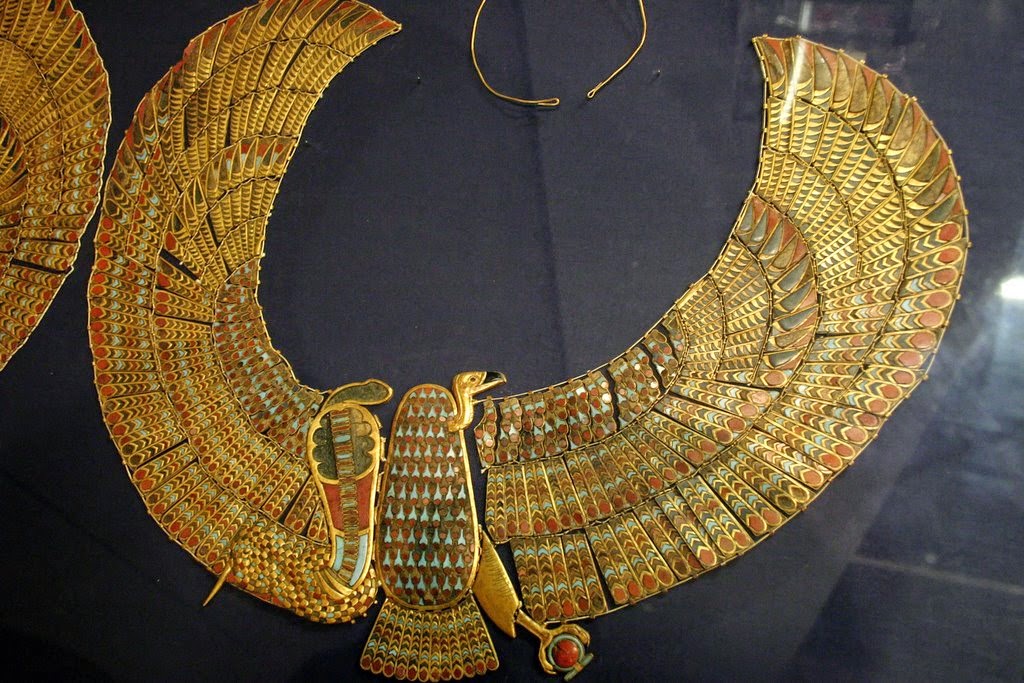 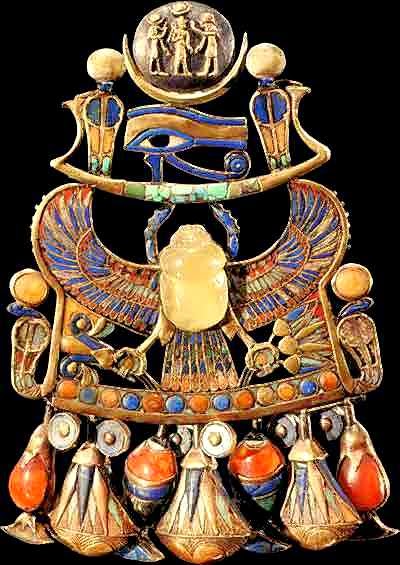 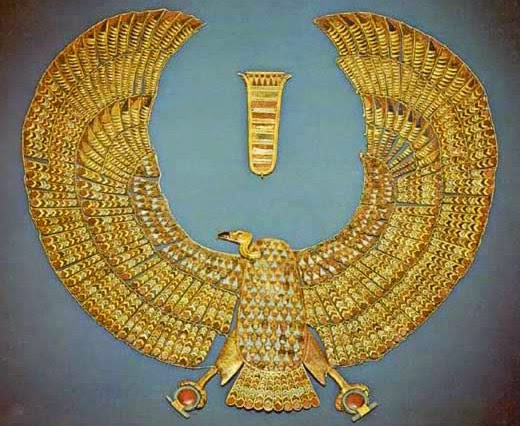 The gold breastplates and necklaces above the heart can lower the electrostatic charge from the head to the lower part of the body. It was enough just to bend the head to create a discharge contact from the gold beard to the breastplate followed by other lower placed jewelry placed on the body. Scepters had the same function. According to the jewelry and amulets placed on Tutankhamun’s body, these items are strangely placed in, what other cultures call, Chakra points. (http://www.griffith.ox.ac.uk/gri/4tutmdra.html) 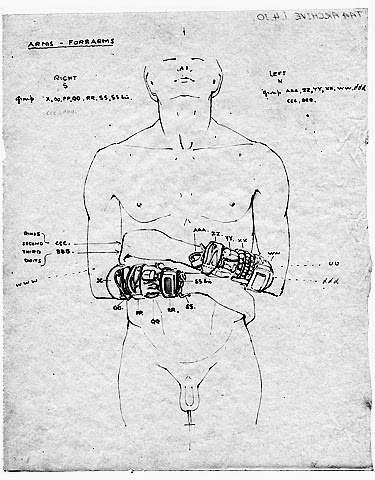 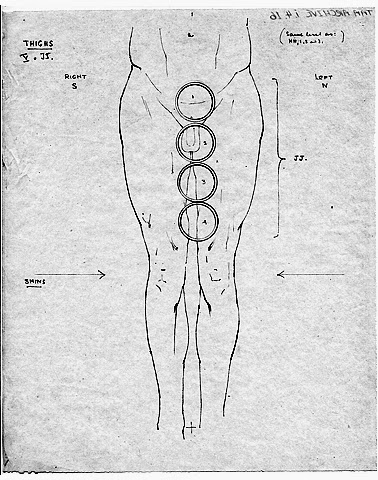 As nerve nodal points these areas of the body convey the electrical impulses of the living being to the brain and back. Other important ancient civilizations knew it! Acupuncture is just an example. Different methods were used to reach similar results: body electric equilibrium and control, brain wave boosting and increased focusing capacity. 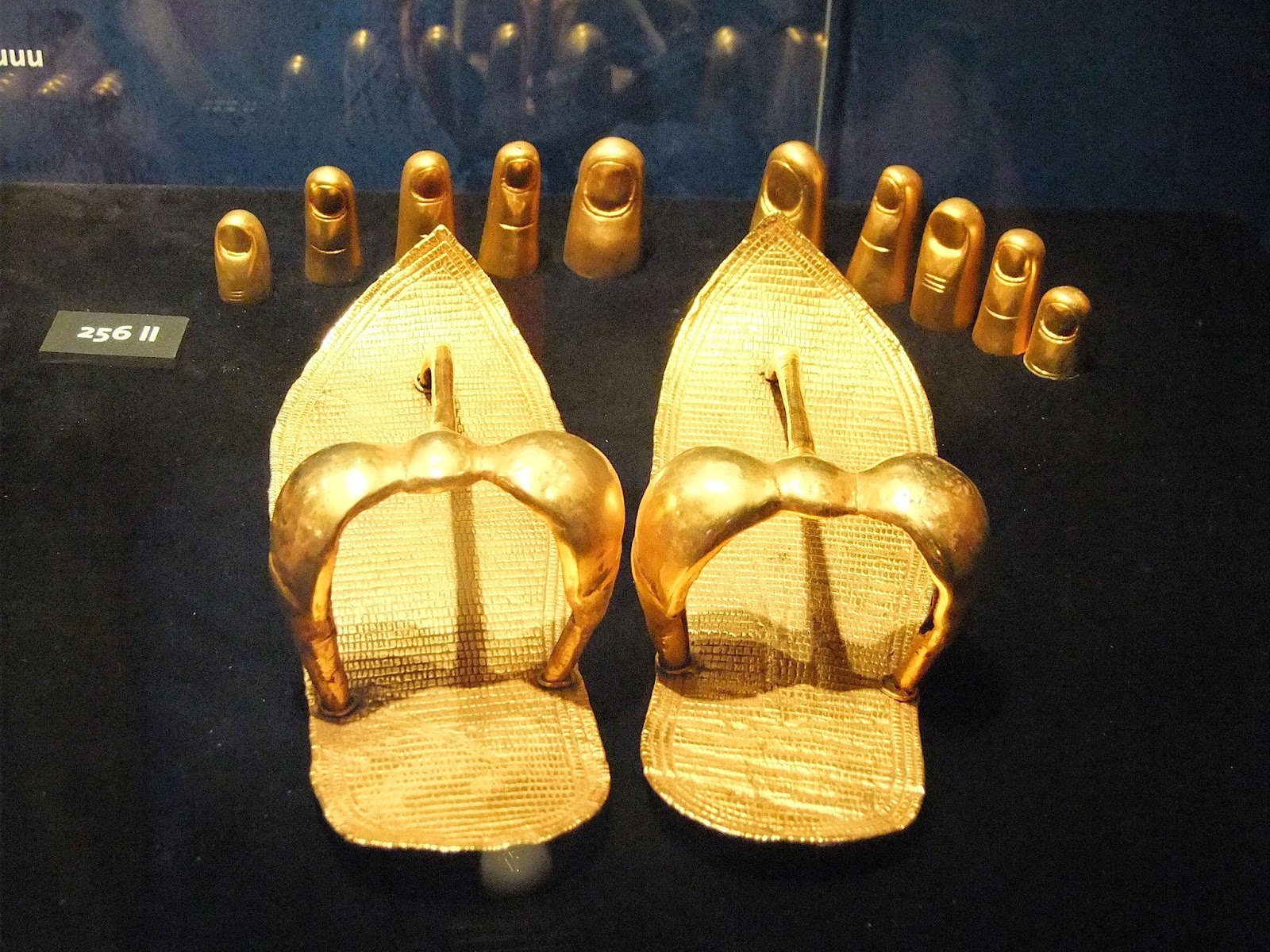 Electricity seems, according to other scientific fields of research, the engine of creation, of the fabric of the Universe itself.
Prior of publishing this article I asked a couple of neurologists their opinion on my theory. They confirmed as expected that induced and controlled electricity applied to the nervous system (particularly to the head area) could lead to brainwave response and as a professional, off the record, advise they recommend to who is in pain, to go back to traditional medicine at least in parallel with the modern one. They questioned rhetorically how the ancients accumulated this knowledge and if they found it out by themselves or if it was a “gift” from somebody else.
Electronic engineers confirmed also that “sacred electronics” and “sacred suits” could be technical devices, even if they were not able to determine the exact practical use.
I just want to remember you the use of defibrillators, electro-shock in mental illness (obsolete and counterproductive treatment by now) or tasers as electric gadgets or procedures that use electric discharge to repair or disrupt neuronal electric balance. Maybe ancient Egyptians were able to use some of their static electricity regalia as weapons as well.
I can't avoid thinking about some gestures that are recurrent in certain religions, that could be interpreted as a deliberate electric discharge of the head and the upper body. I will give you some examples. The Muslims are touching the ground with their foreheads and are touching their faces during prayers. They are always barefoot! The Christians are making the cross sign by touching the forehead, the lower part of the chest and the shoulders at the end of very intense prayers. Is it an extra electrical charge present in certain parts of the brain that has to be neutralized? Is a longer term exposure to prayer dangerous for the brain activity? Anyway, newer religions are more "popular" and the need for gold head bands and precious accessories seems to be eliminated. Or is it just a different brain wave frequency in use?

In my opinion modern archaeology should rely on sciences which are, apparently, very far from its field of expertise. Experts in electronics, neurology, genetics, geophysicists, statisticians, geologists and astronomers have to play an active role in every ancient archaeology project. Even Sci Fi authors or journalists could be involved just to put the most outrageous theories in the arms and minds of the experts.